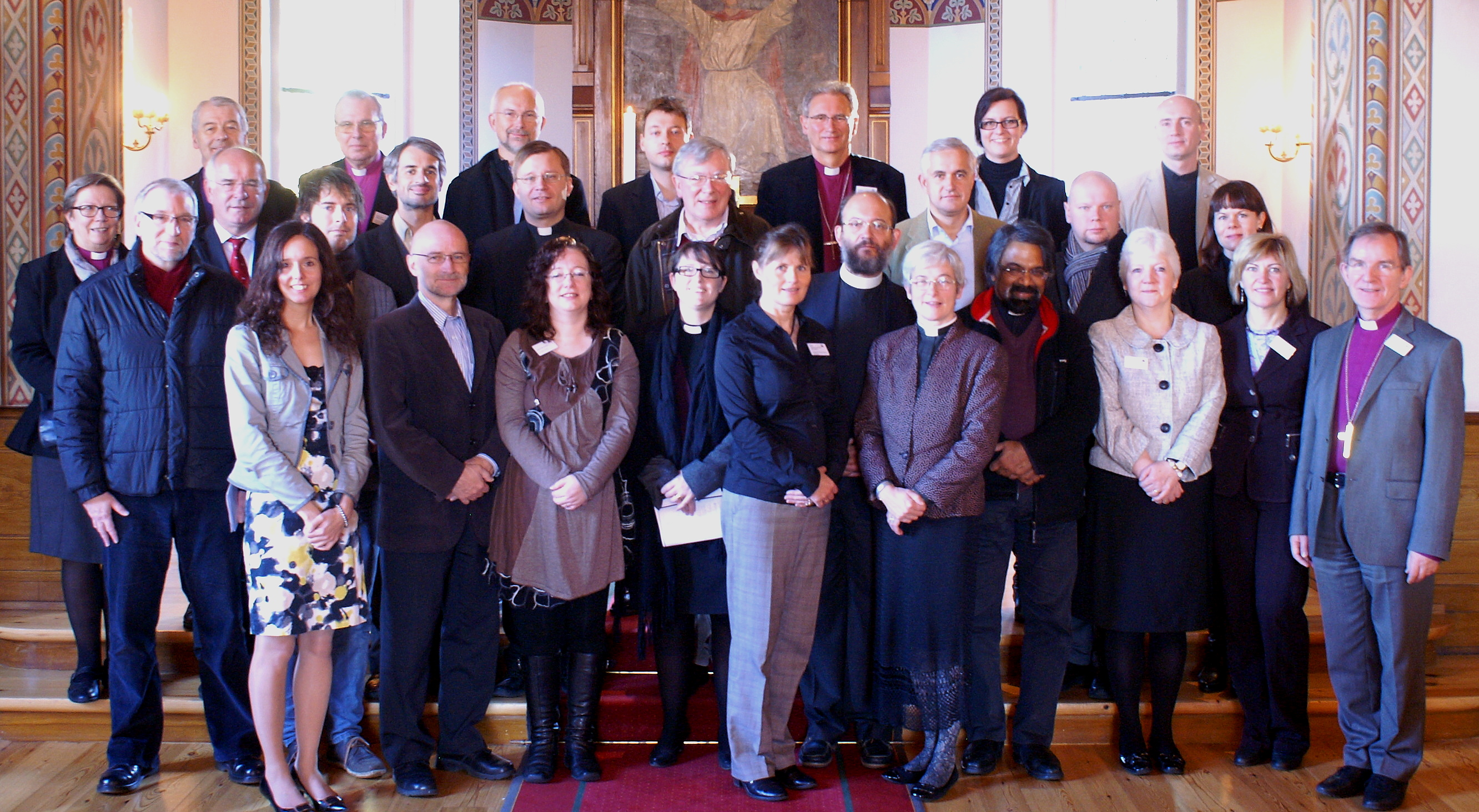 The fourth Porvoo Theological Conference was held in Dragør, in Denmark, October 8 – 11 2012.  The theme was The Sacraments in the Mission of the Church. Delegates from all member churches participated.

Members of the Porvoo Churches live in rapidly changing contexts in which the traditional pre-suppositions for celebrating the sacraments and communicating the Christian faith can no longer be taken for granted. The major concerns addressed by the Conference include the following:

Giving some attention to the place of confirmation albeit conflicted in the initiation practices of the churches, the presentations of the Conference focused particularly on Baptism and the Eucharist. Both are understood to be fundamental sacraments of the church, making the church itself a sign to the world of the Kingdom, which is its mission to announce.

Jonas Jørgensen spoke about Non-Western Perspectives on the Sacraments of the Church with examples of marginal forms of Christian practices in Bangladesh and South India, such as the Sufi Islam with Jesus as their prophet and the Christ Bhaktas. Some of the rites were similar to our western traditional liturgical practice, while reflecting a deep and principled concern for contextualisation.

Karl Sigurbjörnsson presented a paper on Understanding Discipleship as the Working-out of Baptism. He pointed out that discipleship as working-out of baptism is being an apprentice of the master, in a growing, learning and listening relationship, acquiring skills in faith, listening skills to the word of God, trusting skills in being carried and held by grace through suffering and pain, through sin and guilt, through life and death and being loved and forgiven. Discipleship is not about performance or achievement, it is all about grace received and given.

Ian Paton presented a paper on the Baptized in Mission. A significant point in his paper was that the gifts of baptism for the building up of the Body of Christ are received and employed in the context of real life – economic, social, political, professional and personal. It is this life which is being transformed to be a Christian life. Christians remain part of their society with a duty to exercise citizenship, and it is there that they serve and witness to God’s kingdom. The church is to witness God’s love. Renewing the church is not all about structures, strategies or committees, but trying to practice a life of prayer and the love of one’s neighbour. Such a baptismal ecclesiology could open up fresh possibilities for understanding and practicing a baptismal missiology.

Sandra Gintere reflected on The Unity given in Baptism as Foundation for Christian Reconciliation Work in the World pointing out the ecumenical complexities of the relationship of baptism and membership of the church. The identity of being a member of the universal church given in baptism is primary and that of belonging to a denomination is secondary. However, as she pointed out, due to lack of full communion baptism appears to make the secondary identity the primary one.

Christopher Cocksworth in his paper on Confirmation in the Missionary Practice of the Church discussed a variety of understandings of confirmation, pointing out the uncertainty in both theory and practice that exist in the churches. He advocated that confirmation be more closely related to empowerment for missionary activity in the world. He suggests that the sacramental initiation processes of the church should intersect with the evangelistic courses of parishes.

Jaakko Rusama identified Challenges for Mission Theology Today. He described the rapid shift of the centre of world Christianity to the Global South. The mission of the church is a window to what happens in the life of all religions. He argued that a new evangelism for the transmission of the Christian faith would need to reflect cross-cultural interdependence.

Michael Jackson’s paper Eucharist: A Sacrament of Unity and Mission in one key thought pointed to the perspective of Michael Ramsey. Michael Jackson observed that Ramsey provides a strategic backdrop for an understanding of the Eucharist in the Porvoo context. It respects the New Testament shape of the Eucharist and takes us far beyond any static and memorialist understanding of Holy Communion. Eucharist is firmly set in the context of the Incarnate and Ascended life of Christ. This perspective, he went on to say, accommodates well the very resolute Porvoo perspective that the unity and mission are those of Christ.

Peter Stjerndorff gave examples from his pastoral ministry to illustrate the theme Eucharist – A Sacrament of Hope. He described how people at various times and in some contexts have felt themselves excluded from the Eucharist because of a sense of its seriousness and holiness and their own unworthiness. This situation has kept them away from experiencing the joy and hope of the sacrament. However, all people should be welcome at the Lord’s table because Eucharist can inspire hope in those whose lives are oppressed and affected by difficulties of different kinds.

Tomi Karttunen in his paper Lutheran Teaching of the Lord’s Supper and its Implications for Mission traced the rediscovery of Martin Luther’s realistic thought in the Eucharist. Tomi argued that God as the giver of everything good is the basis of Luther’s theology of Holy Communion. Luther’s understanding of the Holy Supper underlines that the Holy Trinity, God as self-giving love who sends his Church, Christ’s disciples into the world to proclaim the Gospel in word and deed, in the unity of faith and love and carried by the proclaiming hope for the world, is the basis of the mission of the Church.

Rachael Jordan presented The Sacramental Life of Fresh Expressions of Church, which is a more recent movement within the Church of England and other denominations to reach the un-churched and the de-churched. This is an answer to the challenge posed by the fact that an increasing proportion of the English population has no direct contact with the church. Fresh Expressions gathers people together outside traditional forms of congregation to guide them towards a position of faith and active discipleship.

Gwynn ap Gwilym reflected on Archbishop Rowan Williams lecture The Fellowship of the Baptized and its implication for the Porvoo vision. The Archbishop explains baptism and the identity of a baptized person by saying that baptized identity is being where Jesus is; and Jesus is both in the neighborhood of God the Father and in the neighborhood of the sinner. This experience of the baptized is not the experience of endings but of repeated new beginnings. To be in the place where Christ is means being vulnerable. The baptismal body, the Church, is a wounded body and those wounds are often self-inflicted, but it is also a self-healing body because it is Christ’s body. Rowan Williams draws consequences from this for the situation of inter-church marriages. They could be a mark of the self-healing body. This could also be applied to the Churches in the Porvoo Communion.