THE PORVOO COMMUNION OF CHURCHES 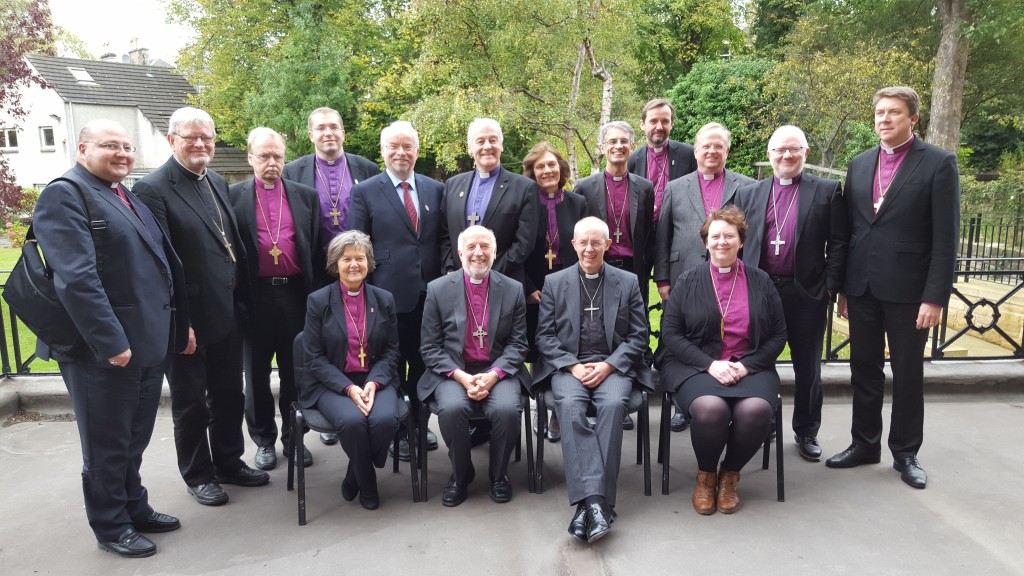 In the context of the crisis in the Middle East, Europe is facing one of its greatest challenges since World War II.

The Primates and Presiding Bishops of the Porvoo Communion of Churches met in Edinburgh for their regular biennial meeting, and reflected with urgency and compassion on current geo-political and social challenges as well as ways to further strengthen their relationships and work together towards building a confident and missional Church in an increasingly secular and pluralistic Europe.

On a daily basis people risk their lives to cross the Mediterranean sea; people walk long distances to cross into Europe because they do not have any other choice; also in parts of Europe, for example, houses have been set alight, so that refugees do not find a home; and there is a rising anxiety in some parts of Europe that democracy is being eroded by intimidation towards strangers seeking refuge and security.

The Primates and Presiding Bishops were unanimous in reiterating that we should not stand back and remain silent, but must both speak and act, remembering the words of Jesus; ” For I was hungry and you gave me food, I was thirsty and you gave me something to drink, I was a stranger and you welcomed me” (Matt. 25:35). They were also unanimous in their concern and prayers for Christians and other minority groups threatened by extinction in the Middle East.

A number of Primates and Presiding Bishops spoke of practical initiatives already underway in churches and communities in consultation with governments. Primates acknowledge the complexity and difficulty of the crisis unfolding also in Europe. They recognise that many countries have made and are making enormous efforts in hospitality, aid and finance. Accepting the pressure on political leaders they called for prayer and support for them and for those who resist the destructive calls of extremist groups that reject all support for the migrant stranger and those seeking refuge.

Churches continue to have a critical role:

The Primates also discussed the report of the Porvoo consultation on Perspectives on Economics and Ethics – Behaviour Under Scrutiny. They thanked the Porvoo Contact Group for a document containing key biblical and theological insights, important sections on human rights, engaging with the economic system and reflections on, for example, the Jubilee imperative that points us to ethically based economic principles and behaviour, the question of who is our neighbour and our relationships as God’s gift to us, so that there is life and the world may believe. Primates recommended that the document be widely circulated as an additional resource to churches to reflect upon and use as appropriate.

The Primates took note of the successful Porvoo Pilgrimage from Porto to Santiago de Compostela and requested the Porvoo Contact Group to explore ways of replicating this pilgrimage model to enable mutual learning and sharing inter-generationally.  The value of pilgrimage remains an essential part of the spiritual life of the churches.

The Primates meeting was rooted in the Celtic spirituality of worship and prayer as a way of living with God, creation and our neighbours. It was hosted by the Scottish Episcopal Church that provided the meeting with insight into the aspects of national identity, the issues around Scottish independence and Scotland’s relationship to the European Union. The Primates expressed their gratitude for their warmth and hospitality.

The presence of Primates from all Churches of the Porvoo Communion was indeed a sign of the gift of unity given in Christ being joyfully received. Primates were keen to encourage the Porvoo Contact Group to carry the Porvoo vision of being together in mission and ministry into the 20 year Porvoo anniversary meetings in 2016.

The Porvoo Communion of Churches is the result of the single most important ecumenical agreement that brought together a wide range of Anglican and Lutheran Churches who have been sharing a common life in mission and service for the past 19 years. The Presiding Bishops of the churches of the Porvoo Communion meet every other year to discuss matters of mutual concern, receive reports of activity within the Communion and to guide the future shared work of the churches.  The Churches of the Porvoo Communion, based mostly in Northern Europe, are Lutheran and Anglican Churches that have signed an agreement to “share a common life in mission and service”. The name Porvoo comes from the Finnish diocese and city in whose Cathedral  the Eucharist was celebrated on the final Sunday of the conversations in 1992 leading to the Common Statement and thus  to the Porvoo Communion of Churches.

The Bishops closed the meeting with a commitment to meet again in two years in Lithuania, hosted by the Evangelical Lutheran Church in Lithuania from 12-14 October 2017.

Most Rev’d Justin Welby, Archbishop of Canterbury, Church of England

Most Revd Richard Clarke, Archbishop of Armagh and Primate of All Ireland, Church of Ireland

The Rt Revd Carlos Lopez-Lozano, Bishop of the Reformed Episcopal Church of Spain

The Rt Revd Ragnar Persenius, Bishop of Uppsala, Representing the Archbishop of Church of Sweden

Most Revd Barry Morgan, Archbishop, Church in Wales (could not attend).