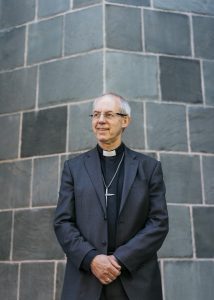 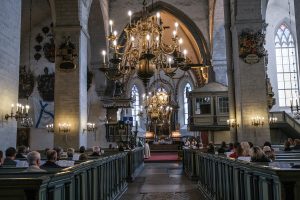 It is a joy to be with you today and to share in our celebrations of the eightieth anniversary of the Lambeth Agreement between the Church of England and the Evangelical Lutheran Churches of Estonia and Latvia.  I bring warm Christian greetings from the Archbishop of Canterbury and the Church he serves.  And I bring similar greetings from the Bishop, and Diocese, of Rochester.  We hold Estonia, Latvia and their peoples in our hearts and pray this love and faithfulness is shared between our nations.  Our churches’ relationship is a fulfilling and deeply meaningful one for us.

The Lambeth Agreement was signed in 1938.  It is hard to imagine a darker, more foreboding moment in history.  To the east, Stalin’s vicious purges were at their height.  These were, at one and the same time, both paranoid and calculated, inflicting physical ruin and emotional pain on the lives of millions, directly or indirectly.  I know this only from reading the work of historians.  As a community, you have living testimony to this.

To the west, in 1938, a wicked ideology, grounded in ethnic purity, was massing for war and the extermination of Europe’s Jewish population.  Terrible, unspeakable things lay ahead, but in our formal agreement, we bore witness to the one, true God who stood above the idolatry manifested from the east and from the west.  And we showed there is a common bond and unity in Christ which is not divided by ethnicity, class or any other ideology.

This unity witnessed then and now to the grace and mercy of God.  Any society that wishes to reflect God’s character does not victimise those who think, look and act differently to a standard set by the government of the day.  Christ died for all and the one who created this unimaginably vast universe cannot be reduced to the status of a tribal god to serve the interests of a ruling power.  Neither can he be abolished by organised, militant atheists, whose wishing away of God is about as effective as a child putting their hands over their eyes in the hope that what lies in front of them will disappear.

Those who lived in 1938 read the same scriptures we do, including St Paul’s letter to the Philippians.  The imprisoned apostle left his hearers with three recommendations as his epistle drew to a close: rejoice in the Lord; do not worry; and experience the peace of God.  Words fall in and out of fashion and in the United Kingdom; rejoicing is one of them.  It is reserved for winning wars and royal births.  The English would like to use it for winning the football world cup, but that may have to wait to the twenty-second century.  Apart from this, it’s not ‘cool’ to rejoice.

But to rejoice in God is to be gripped with his glory and purpose for humanity and for us personally.  The God who became human with the sole intention of sacrificing his life for us and breaking the lasting power of death deserves adoration.  And in this worship we find ourselves rejoicing.  To know the love of God personally is a source of great resilience in life.  And this joy should naturally bubble to the surface in us, like the discovery of a new seam of oil.

St Paul then calls on the Philippians not to worry.  In the United Kingdom we have a children’s book called Mr Worry.  Mr Worry is anxious about everything that happens to him.  Nothing can help him to relax.  When eventually he is freed from worrying about things, he becomes worried that he has nothing to worry about.  There is a lot of truth in this.  The anxiety that many people have is not really related to a single issue, and if that issue is solved, it latches onto something else.  There is, naturally, a purpose to worry when it emerges.  It reminds us we need to do something – perhaps in the first instance to pray.  Pain tells us we must act: a hand held too near a flame will quickly tell the brain it needs to move.  But when we worry excessively, it is as if we continue to hold the hand over the flame until we are burned.

As St Peter said: ‘cast all your anxiety on him, for he cares for you’.  God responds when we unburden ourselves on him.  In 1938, people had good cause to be afraid, yet many would have found these scriptures to be a great comfort.  As should we.  And as we pray for God to relieve our anxieties, we should pay special attention to those whose problems will remain when they have opened their eyes again.  At this harvest festival, it does not take much to imagine those communities across our world where the harvest has failed, and hunger lies ahead.  This a huge test of strength – and of faith.  In Habakkuk, the prophet makes a stunning declaration of faith when he says ‘though…the fields yield no food…yet I will rejoice in the Lord’.  Not everyone can summon up such trust, and we owe them our prayers and all who will suffer because of a poor harvest this year.

In the Church of England, the formal blessing at the end of a service uses the words of St Paul, that the peace of God, which surpasses all understanding, will guard our hearts and minds.  However, the blessing is usually detached from Paul’s wider point, which is that if people want to experience this peace, they should first pray to God with their requests and thanksgivings.  This is the transaction God is searching for and it is a peace which anchors us deeply in the life of the Trinity.  A community which turns away from God finds its spiritual hunger unsatisfied.  The bread of life is discarded, but substitutes must be found to relieve the empty soul.  Some of these can be powerfully addictive, like drugs.  But there are many medications, like entertainment, shopping and work, which others use to fill the emptiness they feel.  There is nothing wrong with these things, but turning to them constantly as a way of filling the void is like trying a diet of fast food.  It gives us a boost, but the boost does not last, and we turn back to it again to get another boost, and another, until the diet of fast food ruins our health.

We need this peace, because we never know what lies around the corner.  When the fiftieth anniversary of the Lambeth Agreement was celebrated, the year was 1988.  The ending of the Soviet Union and Estonia’s restored independence were less than three years away between them.  No-one knew that, except the God to whom we offer our prayers.  When the seventieth anniversary of the Lambeth Agreement occurred in 2008, it was just as the cracks were forming which led to a global economic crash.  Few people predicted this or were clued up to what this would mean.

In 2018, we have more of an idea, as populist politicians emerge, promising to deal with the problems surrounding us.  Many flirt with the same ideologies which brought the world to its knees around 1938.  We live in the political era of the strong man – and it usually is a man.  The modern authoritarian leader is not interested in building up political and civic institutions.  They tell people it is easier to place our hopes on one person than to refresh our public life, out of which resilient societies are built.  In any case, the strong men across our political world want to extinguish as much civic life as possible, because it is out of a lively community that ideas and opposition emerge.

Only the Lord Jesus Christ has the strength to deliver the people personally.  And he did so by submitting himself to weakness and shame on the cross.  As St Paul said elsewhere: God’s weakness is stronger than human strength.  There are profound lessons for our political life in this.

Who knows what this world will look like when we reach a hundred years in 2038?  Of one thing we are sure.  The God for whom the nations are but a drop in the bucket will be receiving praise, relieving worry and dispensing peace until his kingdom comes and his will is finally and fully done on earth.